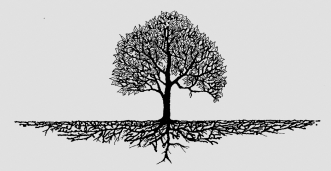 I lie in the grass looking up at a tree,
and I wonder, can tree, somehow also see me?
As he’s wanting for eyes, you’d think probably not,
though eyes be just one way of seeing we’ve got.

A bat can see perfectly clearly at night,
be he flying with speed, or with speed at great height;
for a bat can see sound, which may seem strange to us,
but to him it’s as normal as catching the bus,
or even more normal than that truth be told,
‘cause he does it from barely 15 minutes old.

Maybe trees do the same with their roots in the earth.
Standing and feeling, from moment of birth;
feeling through soil what’s walking around,
or what’s slithering or crawling, up there on the ground,
or what’s lying there dreaming with head close to trunk,
dreaming of poems of trees to be thunk.

While it does seem unlikely he’d know it was me,
would he know me as something that’s other than tree?
Or does tree, through the earth, feel all to be he,
rather than feeling it’s me, separately?

Can a tree really see? Well I still have my doubt,
but I certainly wouldn’t be ruling it out.

This work is licensed under a Creative Commons Attribution-NonCommercial-NoDerivs 3.0 Unported License.
Join 208 other subscribers